physician behaviors and sexual boundary violations. He has won both the Distinguished Teacher’s Award and the Golden Apple Award for excellence in medical student education at GW. He was also awarded the American Medical Association (AMA) Foundation Leadership Award and Caron Educational Excellence Award for his work in substance abuse and addictions. Dr. Samenow is a member of the Washington D.C. Physician Health Program. He is a former faculty and graduate of Interlochen Arts Camp and was an art administrative intern at the John F. Kennedy Center for the Performing Arts in Washington, D.C. 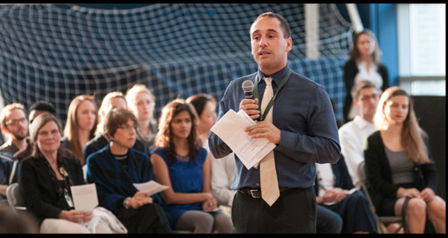 CHARLES SAMENOW, MD, MPH (DRAMATURG) is Managing Director of The New Theater of Medicine and the Director for Medical Student Education in Psychiatry at the George Washington University School of Medicine. He has presented both nationally and internationally on physician and attorney health issues and has published peer reviewed articles on disruptive

JEFFREY ALLEN STEIGER (Artistic Director) is the founding Artistic Director of the CRLT Theatre Program at the University of Michigan and has been working in theatre and with interactive theatre techniques for over twenty years.

Mr. Steiger has written and directed more than 25 plays and sketches that have been performed at over 60 academic institutions including Harvard, Stanford and the University of Nagoya, Japan. Mr. Steiger's  recognitions include the TIAA-CREF Hesburgh Certificate of Excellence, the James T. Neubacher Award, and a leadership role in the Association for Theatre in Higher Education Interactive Theatre Focus Group. He has also collaborated with Robert Mankoff, editor of the New Yorker Cartoons, on using improvisation to explore Mankoff's ideas regarding status and the psycho-biological roots of humor.